Welcome readers. This page will give you a complete idea about the the various methods used to remove and shrink fibroids.

What are the symptoms of fibroids?

What happens to fibroids in pregnancy?

What are reasons to undergo fibroid removal?

What is the treatment for fibroids?

What Diagnostic investigations that are commonly done before treatment?

How does fibroid surgery improve fertility?

Fibroids are non-cancerous solid tumors of the uterine muscle. They are present in about 10 to 20% of the women.

What are the symptoms of fibroids? 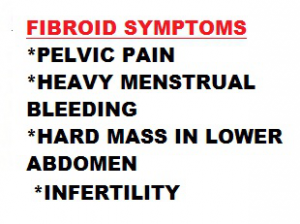 Most women present with pain, heavy bleeding and infertility. In some cases with large fibroids, ladies may present with a hard mass in lower or mid abdomen.

The effects of the fibroid on the lady will depend on the position and size of the tumour. Fibroids which impinge on the cavity of the uterus are most commonly associated with infertility and in later life, with heavy menses.

If the fibroid may at times form a fibroid polyp that occupies space in the uterine cavity. Fibroid polyps often cause infertility and heavy menstrual bleeding.

The fibroids within the muscle layer of the uterus (myometrium layer) may grow to large sizes without causing any symptoms to the lady. In some cases, very large fibroids may develop poor blood supply and undergo a change called fibroid degeneration. In a few ladies, degenerated fibroids may cause pain.

Fibroids closer to the uterine surface are often the least symptomatic. Some of these surface fibroids may develop a stock. These are called pedunculated fibroids and these may undergo twist of the stock called torsion. These types of fibroids may be confused for ovarian tumors.

What happens to fibroids in pregnancy?

What are reasons to undergo fibroid removal?

The sole purpose of myomectomy is to improve fertility. A myomectomy preserves the uterus for the future reproduction.

Myomectomy done for any other purpose or to preserve the uterus in the mistaken belief that such an act will maintain the feminity or sexuality of the patient is not ideal. Unfortunately, more than two- thirds of women who have had myomectomy are at risk of developing menstrual irregularities or heavy bleeding due to uterine causes.

Usually the lady presents with several years of married life and wanting pregnancy and the ultrasound reveals a fibroid indenting the uterine endometrial cavity. This means that the fibroid occupies space inside the uterine cavity or distorts the shape of the uterine cavity in such a way that implantation of the embryo is hampered.

A polypectomy done hysteroscopically is slightly different and is not discussed on this page in detail.

What is the treatment for fibroids? 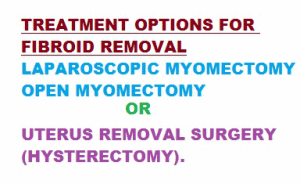 Methods of removal of fibroid:

Other methods of shrinking fibroids:

What Diagnostic investigations that are commonly done before treatment? 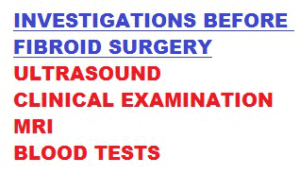 These blood tests give the doctor an idea of your fitness for the surgery and will help the doctor to plan any preoperative treatment for a safe surgery.

Some ladies having heavy bleeding may also have decreased haemoglobin in blood (anaemia) and may require pre-treatment to restore the haemoglobin levels.

Ladies with medical conditions like diabetes, high blood pressure, heart, liver or kidney disease or any other disorders should inform the doctor prior to surgery so that appropriate diagnostic investigations can be done and a safe surgery can be planned.

The lady has to undergo diagnostic imaging. This usually begins with an ultrasound examination. On ultrasound, a fibroid has a typical appearance and this helps the radiologist to find out the number, location, blood supply and any degeneration of the fibroid. The location of the fibroids are mapped such that the surgeon also gets a clearer idea of the surgical plan so that all or most of the fibroids can be removed in the surgery.

We also like to combine this ultrasound examination with fertility assessment of the lady. This is because infertility is the most common indication for myomectomy surgery.

In certain cases with multiple fibroids, an MRI may be needed to better plan the surgery.

This is the standard technique done by Dr Mayur Pai. This technique involves getting access to the abdominal cavity through laparoscopic incisions.

Every laparoscopy begins with a diagnostic laparoscopy where the size and shape of the uterus is noted. All the fibroids are localised and the laparoscopic uterine incisions are planned.

The idea behind the planning of the uterine incisions is that all the fibroids have to be accessed. Removed and the fibroid bed has to be effectively reconstructed.

In some cases of infertility, add on procedures like fallopian tubal patency tests and hysteroscopy are done prior to laparoscopic myomectomy but in the same sitting.

After removal of all visible and palpable fibroids, we may sometimes need an intra-operative ultrasound examination to ensure that all the fibroids are removed. This is often done in cases where the patient’s uterus is affected by multiple fibroids.

After the surgery, the fibroids are removed out from the abdomen in pieces. This process is called fibroid morcellation. In case the fibroids are smaller in size, they can also be extracted intact through a vaginal incision. These choices are individualised and discussed with the patient before the surgery.

Laparoscopic fibroid removal or laparoscopic myomectomy helps the patient remove her fibroids effectively and with less pain and blood loss.

Laparoscopic myomectomy may however be unsuitable in some patients with heart and lung disease and other disorders that prevent safe use of general anaesthesia.

Most patients recover within 2 to 3 days and can resume most activities in 7 to 10 days.

Infertility treatment in most cases can be started after 6 months of the surgery.

Open myomectomy is the traditional way of removing fibroids through an incision on the abdomen. This technique is lesser used after the use of laparoscopic myomectomy but is mentioned here for better understanding of the subject. Dr Mayur Pai is also well trained in Open Myomectomy surgery.

One major advantage of open myomectomy is that it can be performed under spinal or epidural anaesthesia. This is especially suited for a few ladies who have heart or lung disease that prevents the safe use of general anaesthesia used for laparoscopic surgery.

The abdomen is opened in layers and the fibroid uterus is reached.

The fibroid or fibroids are identified and removed using incisions on the uterus. After the removal of the fibroids, the fibroid bed is sutured such that no empty space remains and this ensures excellent healing.

Once we are sure that there is no excessive bleeding, we close the abdomen in layers using sutures.

Most patients recover well within 4 to 5 days and are able to perform most activities within 20 to 30 days.

Infertility treatment in most cases can be started within 6 months of myomectomy.

Hysterectomy or uterus removal is also a treatment choice that a lady can made if she has completed her family size and does not want to preserve any reproductive function for the future.

Hysterectomy is the only permanent option for ladies affected with heavy or painful menses due to fibroids.

How does fibroid surgery improve fertility? 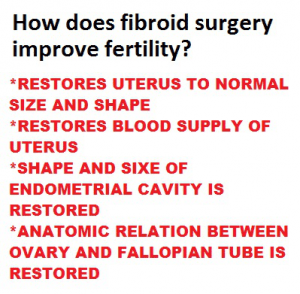 Removal of the fibroids helps in restoring the normal shape and size of the uterus. Not only the external appearance of the uterus is restored, but also the functioning of the uterine muscle layer also improves.

The blood supply of the uterus is also restored to normal. Most fibroids are hungry for blood and this distorts the blood flow of the uterus.

The shape and size of the endometrial cavity of the uterus is also restored. This is very important for a successful implantation of an embryo.

Large fibroids may sometimes distort the anatomical relation between the ovary (the part where the eggs are produces) and the fallopian tube (the part that transports the eggs). This prevents the meeting of the sperms and eggs causing infertility.